TrustBot – A bot to fight bullying 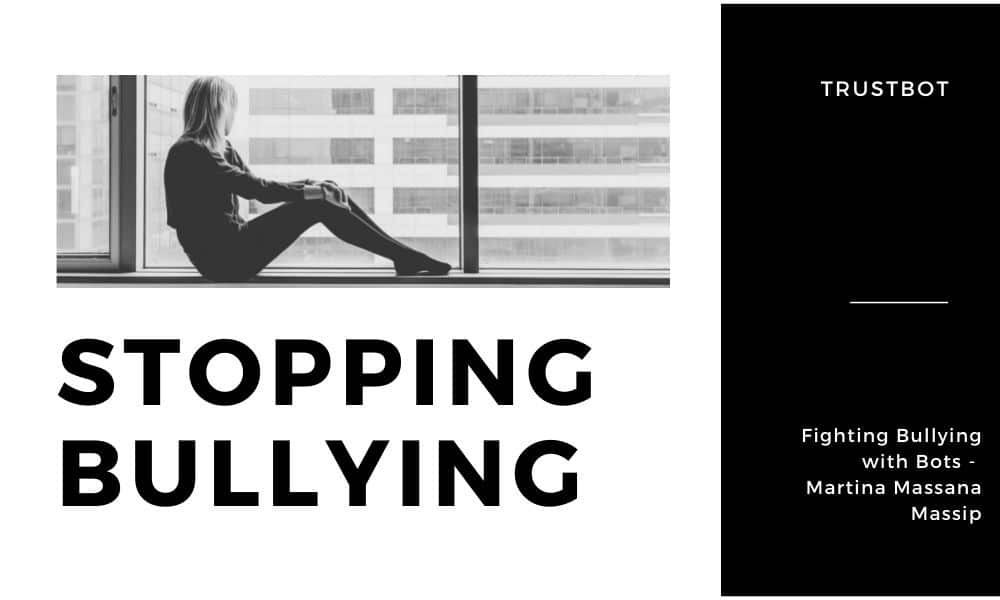 Any child is at risk of being bullied. Stats show that 20% of kids suffer some type of bullying (source: NACE association) which may lead to serious negative outcomes including mental health issues, substance use or even suicide.

Bullying is unwanted, aggressive behavior among school aged children that involves a real or perceived power imbalance. The behavior is repeated, or has the potential to be repeated, over time. Both kids who are bullied and who bully others may have serious, lasting problems – StopBullying.gov

Unfortunately, many of these kids keep it to themselves and do not report that they are being bullied. In fact, only around 20% of school bullying incidents are reported.

To help in the early detection of bullying, Martina Massana Massip, a teenager from Barcelona, has created TrustBot as her high school final project at the IPSI school.

TrustBot offers a safe conversational environment for kids. Via a set of questions, using a colloquial language close to the one used by kids in their daily life, the chatbot can detect some bullying warning signs to be used as first diagnosis. The chatbot by itself does not pretend to reach a final conclusion but an initial screening that can help teachers and health professionals to identify kids to may be suffering bullying (in silence!).

It may seem counterintuitive but children may feel more confortable talking to a bot than talking to a human. Especially in situations like bullying or other types of personal problems as they may believe they will be judged or even blamed by adults (even family members) if they open up to them.

The bot right now only speaks Catalan but it could be adapted to other languages and/or other bullying detection protocols.

Beyond the usefulness of the chatbot itself, I think this is a great example of a teenager that decides to spend her time doing something useful. We often blame and criticize teenagers (e.g. they have been often blamed for COVID-19 spread) but this example shows that, more often that not, they DO worry about the world they live in. It’s also a great example of how technology can play a positive role in our society, especially in the digital health domain, an promising intersection we are also exploring as part of the XarTec network together with researchers from other disciplines, like Marta Massip. Finally, it’s also a great example of women in STEM fields that can hopefully inspire also other girls.

So, congrats Martina for this wondeful initiative. We, at Xatkit, are happy to be a small part of this project. You can read an interview with Martina on the Spanish newspaper LaVanguardia.